Our day started with a 5 am pickup for the 1.5 hour drive to the airport in Arusha, headed for the Serengeti. We arrived at the airport, which was little more than an airstrip. All of the planes on the field were tiny – no more than 15 passenger planes. We did not expect this, but as more Americans and other tourists arrived to take short flights similar to ours, we felt a bit better.

We were walked out to our plane, which had propellers on the wings, and climbed aboard with the other 8 passengers plus the pilot and co-pilot. We were no further than 10 feet from the cockpit, which was open for us to see. We watched the pilots get ready for takeoff; checking the instrument panel, starting the propellers and revving the engine. As we sat on the runway, I was suddenly panicked at the thought of flying anywhere in a plane where I could watch the pilots at work. We took off and it was surprisingly smooth, with amazing views of the land below. At one point, we passed a mountain peak that the pilot yelled back for us to see. We landed in Kogatende without incident and met our driver and guide for the week, Daniel Nyamoga.

Daniel took us to Mara Kati Kati – our tents in the Serengeti. This camp is completely remarkable. In a remote part of the Serengeti, there is a large main tent where we eat meals and relax while watching the sunset. Each table in the tent is set beautifully with colorful napkins and white dinnerware. There are 6 individual tents on either side of the main tent. Our tent was amazing, with comfortable beds, beautiful, warm blankets and a regular bathroom and shower. How they accomplish this is a wonder. There is a tank in back of our tent that someone manually fills with hot water so that we can shower. We tell him when we want to shower, and he comes behind the tent and tells us when to pull the chain for the water. It was hot and nice and impossible to believe that they could make everything so comfortable.

After settling in, we went for a late afternoon game drive. The first animals we saw were a herd of wildebeests; such funny looking and sounding animals they are! Not far away were a herd of zebras. Wildebeests and zebras often graze together, as they are safer from predators in larger groups. There are zebra herds everywhere, but each time we see them, we are awed by them and how perfectly and uniquely they were created.

Next we happened upon an elephant family, complete with babies. They were walking toward us and continued to walk our way until they passed right in front of us and had to walk around our jeep. They were huge and fantastic to watch. The babies never wander too far from their mothers. There was an elephant that was trailing behind the herd and we were to see this several more times with different elephant families. When a male elephant reaches the age of sexual maturity, the matriarch of the family pushes him out. Eventually he will leave the family so that he doesn’t inbreed and mate with his sisters.

We were driving along the Mara River, so we were lucky to see large groups of hippos. One group had a tiny newborn hippo, and another group had several babies. We had a fantastic view of them because they were sunning themselves along the river. When they are in the water, all you can see are their eyes, ears and nostrils. Laying on the rocks, you could see areas of their skin turning pick because they release an enzyme that acts like sunscreen and turns pink in the sun.

We saw topi, an animal with horns that looks like a little like an antelope. We saw many impalas, and saw a lone giraffe.

All in all, an amazing introduction to what awaits us in the Serengeti. I can’t say enough about our guide Daniel. He has been a guide for 14 years and is an incredible wealth of knowledge. There seems to be nothing he doesn’t know about the animals here; their habits, their biology and everything about their environment. We are lucky to have him as we are learning so much on this tremendous safari. More to come tomorrow as we head for a full day game drive. 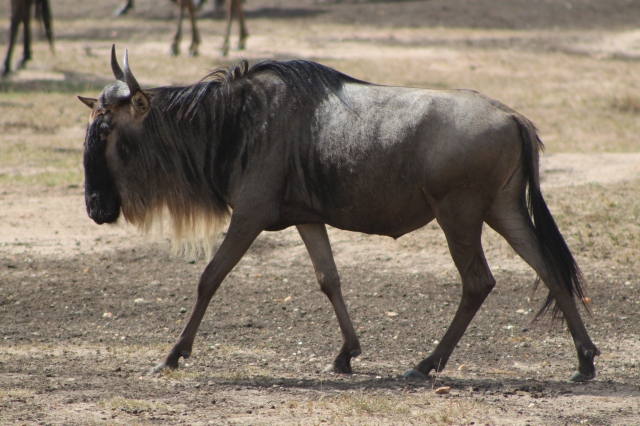 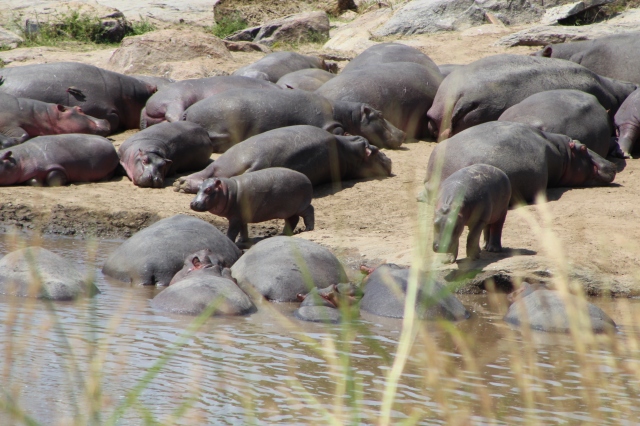 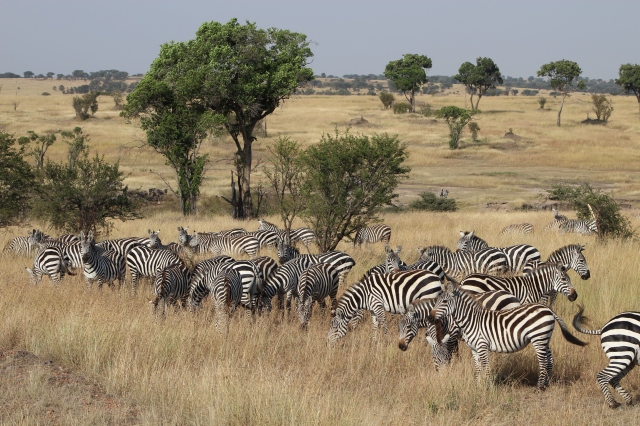